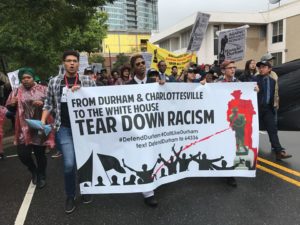 1. Call Durham County DA Roger Echols at 919-808-3010 to drop all charges against the Durham anti-racist activists for the events in Durham related to the toppling of the Confederate statue.

2. Call NC State Senate President Phil Berger at 919-733-5708 and urge the state legislature to repeal the 2015 law GS 100-2 that prohibits local governments from removing Confederate Statues and other vestigates of white supremacy

3. Tweet @DurhamCounty and @SenatorBerger for charges to be dropped and repeal of 2015 law

Show solidarity with the growing people’s movement that is challenging the racism that allows public monuments to white supremacist ideals and values in the form of Confederate statues to stand in our communities.

On August 14, Durham residents took down the supremacist Confederate soldier statue in front of the Durham Courthouse. This occurred just two days after Nazi’s and KKK rallied in a “Unite the Right” rally in Charlottesville, VA to defend Confederate statues and killed an anti-racist protester, Heather Heyer. The Durham action was another powerful expression of people’s anger and disgust with how the system uses its power to remind Black, Brown and oppressed people of their “place” and ongoing oppression and exploitation.

After Heather Heyer’s murder by white supremacists in Charlottesville in August, Conferderate flag sales quadrupled. In Durham, people took the Confederate monument down themselves – demonstrating that many feel they should take matters into their own hands when governments attempt to stop progressive social change.

In 2015, the Republican-dominated NC State Legislature passed a bill that took away authority from local city and county governments to remove Confederate statues from their property, GS § 100-2.1. This is the same state Legislature that the US Supreme Court ruled gerrymandered voting districts based on race with “laser-like precision”. The state Legislature also passed similar legislation – HB2 — that eliminated local governments’ power to protect trans-gendered people from hate crimes, or enact protections for workers from abusive employers, like raising the minimum wage and improving working conditions for contractors. 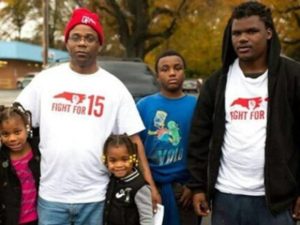 Abdul Burnette, 20 years old was arrested on September 23 for three misdemeanor charges. Yet he was given a $10,000 bond, typical of felony charges. His father, also named Abdul, a leading fast food worker in the local Fight For $15 movement, attempted to post bond but was not allowed to bond him out. This is why we demand ABOLISH BOND!

Before being convicted of any crime, a judge sentenced him to a 60-day “Starr and Grad” drug rehab program inside the jail. This is why demand END CRIMINALIZATION OF PETTY MARIJUANA POSSESSION!

According to his family, he has mild autism and is not competent to stand trial. Due to his medical condition, he is required to take medication. The Durham County jail is now charging him $20 per pill that they administer to him. The family is not allowed to provide any medication they previously bought. This expense has been a burden on Abdul and his family while he is locked up. This is why we demand FULL ACCESS TO AFFORDABLE HEALTH CARE and END CONTRACT WITH ABUSIVE, EXPLOITATIVE CORPORATIONS

Earlier this year, on April 24 young Abdul was also assaulted by a Durham police officer, Officer Offenburg, on the corner of Fleetwood St. and S. Alston St. in east Durham. His father has filed a complaint with internal affairs of the Durham Police Department and it is still under investigation. This is why we demand END RACIAL PROFILING AND POLICE BRUTALITY!

“The Durham County jail is violating my son’s constitutional rights. We are going to keep fighting until we get justice!” stated Abdul Burnette, the father.

This same jail is scheduled to begin video visitation this week (Oct. 15) for families of those locked up, denying them basic right to visit their loved ones in-person, rather they will be forced to only communicate through a screen ran by a private corporation. This is why we demand FULL IN-PERSON VISITATIONS!

This past weekend, young Abdul was being picked on and attacked by another inmate. In his self-defense he fought back. He is now placed on “lock-back” solitary confinement for the next 30 days and all family visitations have been cut-off. This is why we demand END LOCK-BACK and SOLITARY CONFINEMENT!

This is happening amidst many local struggles in the Durham County Jail including five deaths of inmates in recent years, including the death on March 23, 2017 of 17-year-old Uniece “Niecey” Fennel. This is why we demand NO MORE JAIL DEATHS!

End the contracts with the abusive, exploitative corporations!

The Durham Solidarity Center stands in solidarity with Charlottesville and those who took down the Durham Confederate Statue. We congratulate the people of Durham for their victory in tearing down one of the more visible manifestations of white supremacy.
On August 14, 2017, in the aftermath of a weekend of white supremacist terrorism unleashed in Charlottesville, the community of Durham united to express their solidarity with the people of Charlottesville, and honor those who were injured or lost their lives standing against racism.  The Durham community then took matters into their own hands, tearing down the Confederate monument outside the old Durham County Court House.
The Durham Solidarity Center supports the right of Durham and all people to tear down symbols of hate!
Onwards in the fight to tear them all down and fight back against white supremacy!

RT if you support Confederate statues being torn down 😊 pic.twitter.com/F3Y2sXC9ki 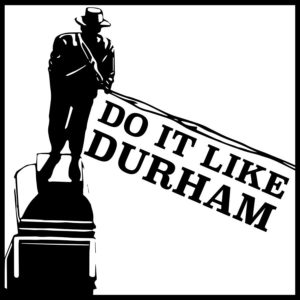